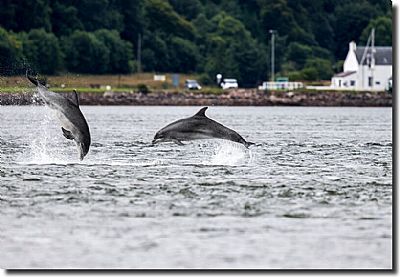 The famous Bottlenose Dolphins of the Moray Firth can be seen from the windows of the Old Ticket Office from early Spring until October each year.  Remember however that they are wild animals and cannot be relied upon to appear each and every day!

There are thought to be around 130 animals in the area and they tend come into the Firth from under the Kessock Bridge an hour or so before high tide.

Some hang about at the mouth of the River Ness chasing the salmon who go up it to spawn and others carry on towards past the Clachnaharry Sea Lock hunting the salmon who are heading for their spawning grounds up the River Beauly which is at the west end of the Beauly Firth.

Best spotted when the water is calm, their presence is often signalled by sea birds who tend to flock above any feeding dolphins in the hope of swooping down and snatching bits of left over fish. Bear in mind also that they can dive and stay submerged for around ten minutes so if you see one on the surface and it dives, it may surface again some distance away. The local dolphins are much larger than most others from different 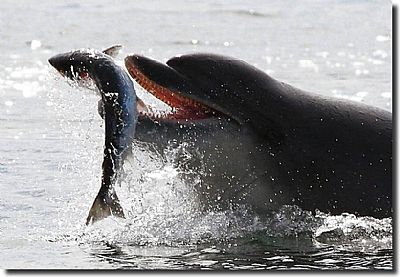 parts of the UK as the colder waters of the Moray Firth requires that they insulate themselves in thick layer of blubber.

The hydrophone which is located off the end of the pier at South Kessock will pick up and transmit the various types of sounds made by the dolphins as they hunt, play or simply chat among themselves when socialising. It may be that the sounds of these animals are the first indication that they are nearby which can only increase the chances of spotting them.

The signal from the hydrophone is transmitted across the water and is received and amplified in the Old Ticket Office to be played through speakers located in the building.

Back to Home Page