The Project So Far

In the summer of 2018 it was decided to install an underwater microphone (the hydrophone) so that the noises made by the Bottlenose Dolphins as they hunted salmon in the narrows between the north and south piers could be captured and played through loudspeakers in the Old Ticket Office.

The Black Isle Men's Shed was asked to implement the plan and two of its members became the project team - Peter Lawrence with his expertise in electronics with John Tuach looking after associated IT matters.

It was originally decided to purchase the equipment necessary to place a hydrophone several metres off the end of North Kessock Pier - i.e. a hydrophone connected to 100 metres of special audio cable to carry the signal back up the pier and into the Old Ticket Office. In the course of inspecting the rear of the building looking for the best way to route the cable down to the water we discovered an length of discarded metal tubing inside of which was a length of old cable.

It was Peter who recognised the cable as being the type used to carry audio signals and at the same time we recognised the metal tubing as being the same type as could just be seen on the other side of the pier wall on the  actual pier where a few inches of it were sticking out of the concrete. Closer inspection revealed that the same audio cable was visible in the tube and after much persuasion, enough of the cable was exposed to confirm that it was audio cable and as far as we could tell, it and the metal tube ran all the way down the side of the pier and out into the water.

After extensive research it was established that the tube and cable were installed by the Whale and Dolphin Conservation organisation who operated the Dolphin and Seal Centre above the village on the A9 and which was closed several years ago. At the end of the cable was a hydrophone and the signal from it was sent via an aerial on the roof of the old ticket office and a radio link back up to the Centre. When the Centre closed, it is likely that the cost of retrieving and dismantling the hydrophone at North Kessock was prohibitive so the decision was made to simply cut off the cable and tube and leave the hydrophone in situ.

end of the pier in the hope of finding the hydrophone. Inverness Sub Aqua Club were approached and they kindly agreed to get their members to undertake the task.

The results of the dive were mixed as although the hydrophone was located and retrieved, in order to detach it from its metal mounting frame it was necessary to cut the wires very close to the unit which made the business of reusing it very difficult without extending the wiring. This is a specialist job and beyond the resources of the team. 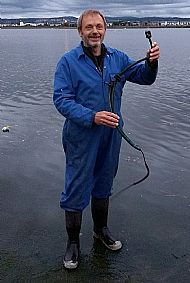 At the conclusion of the dive and as a result of a chance conversation with one of the divers, we were told that there might be a possibility that an identical hydrophone set up to that at North Kessock could still be found in the South Kessock Ticket Office. We contacted Dell McLurg who manages the South Kessock building and she confirmed that there was some hydrophone related equipment there but it had not worked for a while.

A visit was arranged for Peter and I to investigate the situation at South Kessock and we eventually established that most of the essential equipment (including the hydrophone and radio transmitter) was still in place. Peter was able to identify and correct a problem which meant that their scanner had not been locked on to the correct frequency for some time - much to Dell's delight!

The other main problem was that the aerial on the roof of the building had been stolen and all that remained was a few inches of bare wire dangling from the pole. (When in place, the aerial would have transmitted the hydrophone signals back over to the Dolphin and Seal Centre.) Given that these few inches of wire were transmitting enough of signal strength to be received by the scanner at South Kessock, we went back to North Kessock pier and were surprised to find that our scanner was picking up a decent signal! It turned out that this was only the case when the winds were light as in high winds, the length of wire was blown behind the concrete pole resulting in a complete signal loss.

With permission from the relevant parties, Peter retrieved the original aerial which was still attached to the outside of the Dolphin and Seal Centre and managed to install it in the roof of the South Kessock building so that transmission does not now depend on wind strength!

The current situation is that hydrophone signals transmitted from South Kessock can be received and heard using a hand scanner which is located at the front of the Old Ticket Office in North Kessock.

The next phase of the project is to affix a custom made aerial to the outside of the building which should improve reception and allow the use of the laptop, advanced display software and a special hardware dongle as described below.

Software Defined Radio (SDR) to receive the sound signals from the new aerial, create a rolling display on the screen of a laptop and transmit the sounds to an external speaker which can be located anywhere in the building or even outside. This

SDR device plugs in to the laptop and performs the same functions (and more) than the current hand scanner. The software also allows the sound of any dolphin activity to be recorded on the laptop and replayed at any time in the future.